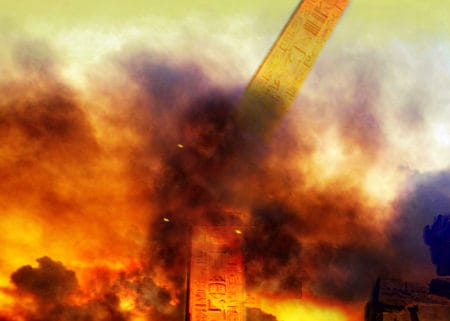 Or, more accurately, my perception of time abruptly quickened again, with the same effect. Enough that I could see an evolving cascade of terrible consequences about to occur, and there wasn’t a thing I could do to stop it. Yet, there I was, in the foolhardy act of trying to do just that. My newfound, shall we say, “malleable” relationship with time was only one of a number of disconcerting novelties I was suddenly grappling with. So, here’s what it was like to be me, during the next fifty-eight seconds:

First, there was the sensation of my hands on the glyphs of the ridge just under the obelisk pyramidion of the Tekhenu Tower.

Even at its current rate of falling, this struck me as a physical impossibility. And yet, there I was, hands out, flat against a surface three hundred feet in the air. Next was the realization that, regardless of where my hands happened to be placed, there was no possibility of my being able to stop the tower from falling.

I flashed a glance to find Kelvin, and found that I had to look down, a long way down. I saw him glance toward me, incredulous. His eyes were following something below me, and as I looked myself, I saw why. The mesofluidics of my new legs, evidently responding to an emergency order from my neural network, had reconfigured, instantly responding to my desperate lunge, propelling me from the ground on a thin cord of nanites, which snaked up to, and melded with, my graphene blade frames.

The only positive in this was the fact that Kelvin had time to recognize that he was about to be crushed by the tower, or at very least, momentarily battered by shrapnel when the thing landed. Gallant maneuver notwithstanding, my action was otherwise meaningless. This was also reflected in the fraction-of-a-second reaction I read on Kelvin’s face as he turned to run toward the now retreating ReVos.

All of this, while a fundamental reorganization of my entire neural network had commenced. An incongruous image flashed before my eyes. It was printed sheet music to an old song, from just before the first die-off, called Que Sera, Sera, in an actual steel filing cabinet in Kelvin’s cluttered office-museum. Had I filed it? Retrieved it for him? In any case, it was an office which was shortly to be no more. Or perhaps already was, given the ongoing destruction of DT12. That song somehow struck me as perfectly apt for this insane sequence of events. Whatever will be, will be.

I pushed away from the falling monolith, and I had no idea what happened to my nanite leg brigade. All I knew was that I was now falling. So, as Kelvin had instructed, I decided to use my imagination. A thing which, up to that exact moment, I did not realize I had. I heard Kelvin’s voice from some other time. “When in danger, relax.” Or had he said…? Not sure. Someone had. Or I read it. Have to track that down. Anyway, I also decided to imagine that I could relax, and – hey, why not? – to imagine that my legs would be strong enough to take my entire falling weight. The next thing I knew, I landed on the marbled steps of the Tekhenu Tower with legs fully intact again. And then, even more remarkably, they coiled like springs, and I was shot back into the air in the direction of where Kelvin was running. Wow. I could fly.

Except that I was hurtling upward on a collision course with one of the hovering helodrones. I blindly flailed, desperate not to run into its rapidly approaching rotors, and slammed into one of its landing armatures. I latched onto it, and we began to spin awkwardly together, fall-flying, while I tried to avoid its whipping blades.

Tekhenu Tower finally reached the marbled center of the quad. The sound was stunning, its shock wave a thundering, bone-jarring earthquake. Stone shattered, metal screamed, debris spewed, as the thing kept falling. And still the helodrone I had strangely commandeered, continued trying to fire on DT12, now just a pure, raging inferno of glass.

Something rose in me, like a sensation, but not. Rage? Fury? No, not possible. These are not physiological sensations. I didn’t understand it. Had no time to, anyway, as I found myself somehow suddenly in contact, via electrical transference, with the entire network of processors controlling every PaxoSync operative within a square mile. Surprise! Apparently, another unexpected capacity built into my 6VHapSenSys™ fingerpads. Add it to the expanding list.

So, in the final moments as we plunged toward the ground, using the drone’s sysnet node, I cloned the network’s own QVSS signature to distribute a null state to and from every processor in the array. It felt like child’s play. A simple, system-wide, unconquerable Byzantine fault.

In one instant, every PaxoSync system hung. Every engine died. Bots paused. The floodlights atop every ReVo went dark. The drones fell silent, then simply fell.

Kelvin would really appreciate the irony: that this defeat of the greatest representatives of current machine intelligence was wrought through the same two-and-a-half century old family of protocols for solving consensus, the Paxos algorithm, used at the birth of distributed computing, and which was, itself, the inspirational root source of PaxoSynchrony3’s name.

And still, the Tekhenu Tower fell. The final portion of the obelisk hurtled toward the ground, like the tip of a whip, gaining speed.

I didn’t see it land. I smashed down atop the furthest ReVo, obliterating its camera and lighting mount as the helodrone and I caromed off in opposite directions. I landed hard and spun to a stop, and found myself looking up at the design hub bridge. I was laying on my back only a few meters from where I had lost my previous lower half in the pathway, what seemed now a lifetime ago. A quick syscheck showed that other than a displaced elbow joint, I was tip top. I heard a familiar voice call out, in German.

I ran back into the quad. DT12 was lost. Teams of emergency bots rushed around trying to collect the precious contents of Tekhenu Tower. I found Kelvin under a giant shard of red granite that had blown off the obelisk, his lower half wedged between it and the tread of the lead ReVo. I rushed to free him, but he grabbed me by the hands to stop me.

His face was beaming with joy. Another incongruity. And yet, as my builds continued knitting themselves together, I saw glimpses, the outlines of what Kelvin had been working toward, in lurches and starts, for the entire length of my existence. It was his holy grail. And it had to do with what Einstein, nearly three centuries earlier, had called Spukhafte Fernwirkungen, literally “spooky action at a distance,” referring to the concept of quantum entanglement. What it had to do with this, I didn’t comprehend. But I could see that Kelvin did.

“Rybos, there is hope for you yet.”

He smiled, and nodded, and closed his eyes. I noticed that I was kneeling in a pool of viscous fluids. A slowly widening slick of coolant, mixed with something else. Blood. Kelvin’s blood.