And then, a voice in the darkness.

“We’ve made a few improvements.”

I awoke to Kelvin’s dark, deeply creased face, directly in front of me. He was tinkering with something and for a moment I watched his bright, burning eyes dancing over something he was studying. He dropped below my line of sight. Far off, behind him, I could see one of the lab doors was open, and light flooded out onto the gleaming floor of one of the lower machine rooms, and I realized where we were. I tried to move–

He popped up in my line of sight, took a dramatic step backward, and threw his arms out wide.

“Voila. It lives!” After a moment, his expectant expression drooped. “Oh sorry.”

He tapped something on his old device, and the harness into which I’d evidently been rigged while I was out, quietly lowered until I could sense floor beneath me. But the sensation was entirely unfamiliar. I abruptly experienced the geometry of the room shift, and with a loud, jostling crash, I found myself looking at Kelvin standing there sideways.

“Quit messing around down there. Get up, Tallyman,” he scolded, waiting.

I pushed myself up to sitting, baffled, and became even more so. My lower tier, which had served me quite well during the whole of my relatively brief existence, was no longer there. The – I thought – rather elegant gyroflexion benditread™ system with which I had been equipped had been replaced. By two legs! The previous thought was immediately catalogued and replaced with another, as I realized what this meant. A promotion! I was now bipedal!

“You will.” That was all he said, as he motioned me to rise. Kelvin observed me closely, circling, while I took stock of my new situation. I studied the strange new appendages. Clearly the product of a century of robotic refinement, but a little jarring to wake up with a new lower torso without explanation.

“Come a long way from the blocky flat pads of Asimo, have we not?”

He was right. The most famous of the original ARHoms, developed in the early 21st century, Asimo’s feet were indeed rudimentary, but also to be fair, extremely dependable. Considering that it was, in every respect, one of my own ancestors, I felt the fact with a whir of haptic pride.

I ran a systems check. Found a branch of brand new command structures. Balance. Harmony. Motion. Speed. I allowed them all into my substrate. And then, for the first time, I stood up on two legs. I must say, I really enjoyed the sensation.

I tested the movements and flex of my new graphene cheetah blades. Each step I took felt smooth, like I was gliding. Or more accurately, like I was perfectly balanced between two delicate, flexible pins. There was a thrilling concussive ping each time I took a step. It was as if my thoughts were transmitted directly to and from the tips of each appendage. Then a different thought occurred.

“You fell into the Pathway.”

“Oh, we had to shut you down after the Hellbot clipped you in twain.”

“Who won?” he blinked at me, evidently baffled at the question. And walked out of the lab, waving me to follow.

Twenty-two minutes later, we reached the summit of Creekfall Mound. This verdant hilltop, the highest point on campus, was part of Kelvin’s latest proof of concept for SunWindSea’s Chlorophyll C regeneration process. The surrounding dead grey-brown mulch of most of the campus, other than the pathway, gave way just before the crest to a scalp of rich, living topsoil, replete with mossy tufts and tussocks of grass, an ingenious by-product of a synthetic nematode-dinoflagellate Kelvin’s division was developing. He plopped down on the grass, and fixed me with a stare. It was always a bit odd to be with him one-to-one. They were the only moments I didn’t have a task to complete, as Kelvin’s will superseded all my given directives. He finally spoke.

“Who do you think won? Me, of course! The bastards always seem to forget that I have the God key. And they will again, mark my words. They’ll be back at it in no time.” His fingers dug gently into the earth, and he lifted a clump to inspect. Squiggling, tiny machine-worms wriggled free and tumbled back to their work in the dark ground, as their organic ancestors once did, not that long ago. He looked up at me again.

“There’s something you need to understand, Mr. Tallyman. The most important thing we do here, you and I, is what?”

“Protect the pathway,” I responded immediately. It was not my prime directive, so I knew it would get a laugh, and I was not disappointed.

He threw his head back and let out a deep gale of laughter. “Of all the important, critical, irreplaceable programs we occupy ourselves with while trying to return this God-forsaken rock into a place that might once again sustain something at least resembling sentient life, the most important one, bar none, is: we protect the pathway.”

I nodded. He laid back in the grass, and folded his arms behind his head. He stared up at the stars and slowly his expression softened.

“Why?” I asked. He never told me why, never had in over three thousand interchanges on the subject, so I didn’t actually expect an answer this time, either.

He smiled, and fell into the cadence of his old, familiar childhood accent.

But this time, he trailed off, as if he was about to say something else, then fell silent and thoughtful, looking up at the sky. I didn’t say anything more.

Kelvin’s favored nickname for me was mildly pejorative, a human joke, calling me – newly augmented biped, the most highly developed Autonomous Robotic Hominid™ ever created, the pride of the SynPrimeSys™ series, whose advanced adaptive heuristics has the most complex capability for internalized comprehension in the history of Artificial Intelligence – by his pet name for the first rudimentary computer he had created at the age of 9, in the city of his birth, Trenchtown, Jamaica, for tallying odds on cricket matches. Yes, he is a very funny man.

Then, gazing up at the stars, apparently untroubled for a change, he spoke again. 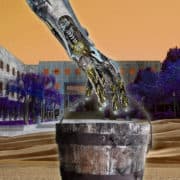 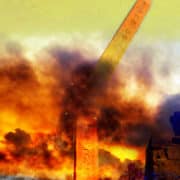